Which are the best castles in Zagreb that you can visit on a day tour?

In preparation for your visit to the Croatian capital, it’s great to know what else, that is worth your visit, is in it’s vicinity. We chose to present the castles that we like the most and that can be combined with other attractions to make excellent day tours from Zagreb or can be included into multiday tours in Croatia.

Best castles in Zagreb ranked by a local guide

Here are our choices of 10 gorgeous castles in Zagreb vicinity:

Conde Nast Traveler in 2017 listed Trakošćan castle among the 12 most beautiful castles in Europe.

And it is true. It’s one of the most beautiful ones in Croatia too. The fairy-tale castle surrounded with woods and a lake enhances the magical feeling of time travelling.

Photo of Trakošćan castle taken from the Lake

The Trakošćan castle was actually built in the 13th century as a defense fortress. It changed many owners through the history but the family that owned it the longest and that left the strongest mark on it was the Drašković family. Thanks to Drašković family, the castle was fully restored and got it’s current looks.

„I will make such a city, such a castle, like you have not seen afar. Generations after me will admire it. You will see!“ said Juraj Drašković before the restauration.

And he was right. After 2nd World War the castle was nationalized and transformed into a museum. Interesting fact is that it has several collections, from furniture to armoury, all thanks to the Drašković family because most of it is from their period.

You can explore the castle by booking Trakošćan castle and Varaždin day tour from Zagreb.

“Count, there is no blame to be laid on this girl, much less crime. The only thing is that she is very much in love with your son Fridrik. However, your eminence, love has never been a sin, much less a crime. Love is one of the most beautiful human virtues! This, your eminence, completes our work.” 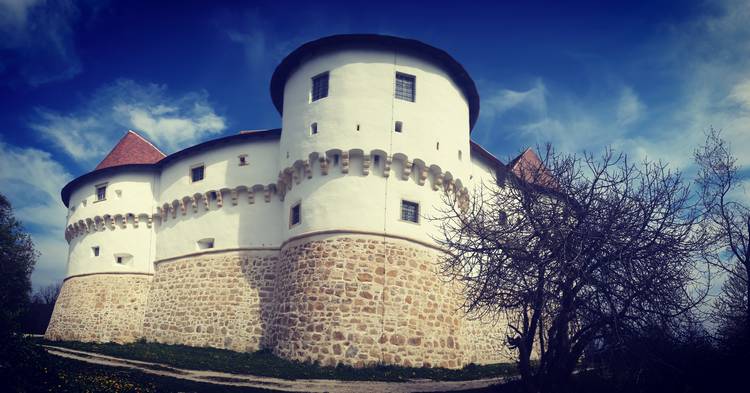 The castle itself was built as a defense fortress up on a 333m high hilltop. Now a museum, it was once a prison, an orphanage and a meat drying factory.You can explore this castle as a part of Zagorje history tour from Zagreb.

Stari grad Varaždin was built between the 14th and the 19th century as a defensive fortress on the edge of the Pannonian plain. In the 16th century, due to the Ottoman empire attacks, it was turned into a Wasserburg, a fortress surrounded by water.

The Old city is still surrounded by the ramparts from which you can see the whole royal city of Varaždin. A legend said that a Bishop once walked on the ramparts to see the city and he meet a „lady of the night“ he tried to stop her and help her find the right path she pushed him down in the canal and the Bishop drowned.

As many of the other castles, it changed many owners. If you visit the fortress today you will see that it’s owned by the city of Varaždin and turned into the city museum. The ramparts are still there and you can still enjoy a walk with a view.

You can explore the old city as a part of our Best of Croatia multiday tour.

Comparing it with the previous castles, this castle, located close to the Slovenian border, was built a bit later, in the 16th century. In time it was rebuilt and new parts were added.

On the top floor Miljana has 8 parlors decorated with frescoes with astrological, pastoral motives and the motives from the everyday life of the noble families from Zagorje.

The castle was firstly owned by the Rattkay family and like many others, it changed many owners, but the interesting fact is that one of the owners was also Kajfež family – the inventor of the medicine Apaurin.

It’s important to say that the castle is privately owned and you need to schedule a visit if you want to see the inside of the castle and it would be a real shame to miss it. We can organize a visit to this gorgeous castle as a part of Zagreb private tours.

Medvedgrad castle was a defensive fortress built in the 13th century as a defense from the Tatars who attacked, burned and destroyed Zagreb (or better to say at that time Kaptol and Gradec). It was built in an excellent way and was perfect for a fight, it was never under attack.

One of the owners was the Celjski family and the stories say that they often attacked and stole from Gradec and that people from the city lived in constant fear from the Medvedgrad lords.

The legend of the Black Queen, Barbara Celjska, is well known as the queen that used and killed her lovers, the one that buried gold under the fortress and was an alchemist. The castle was destroyed in an earthquake in the 16th century.

In 1994 an ”Altar of Croatia“ was built and the eternal fire burns for the ones that gave her the independence and liberty.

If you want to see Medvedgrad, we can customize Zagreb sightseeing tour and include the fortress.

The fortress Old city Samobor was actually built by the Cech king Otokar in the 13th century. Many noble families were owners of the fortress. With time it turned from the fortress to a baroque castle.

The owners were often in dispute with Samobor city and the lawsuit lasted for 2 centuries which ended in the beginning of the 20th century making Samobor city the owner.

It is also connected with the Black Queen with another strange legend. The legend says that the Queen (being an alchemist) made an enormous turtle which came to town to devour all the children in the city until it was only the Queen’s child left. But the turtle came for the Queen’s child too and she asked the citizens to pray for salvation of her child. They accepted with one condition and it was that she leaves the city. The Queen accepted and the lightning struck the turtle and turned it into a rock, just below the fortress. The legend says that if a great evil appears in the City of Samobor again, the turtle will again come to life.

Samobor city day tour takes you to explore Samobor and its surroundings.

The castle Novi dvori Jelačićevi is a great example of a a preserved noble estate. The estate was first mentioned in the 16th century. In 1852 it was bought by Jelačić family and rebuilt the castle. They also built a neogothic chapel of St Joseph which later became the mausoleum of the Jelačić family. The surface of the whole estate is 20,5 acres.

It is located just 20 km from Zagreb and it’s surrounded with a beautiful park so a walk on the estate is always a good idea.

The castle hides many secrets including the love potions that were made for the Ban Jelačić, who was known as a great ladies man.

The castle can be explored on a day tour from Zagreb.

The old city was a fortress built on rock in the 13th century, built on the bank of the Kupa river.

It changed many owners but the owners mentions the most are the Zrinski – Frankopan family which fought against the Ottoman empire but also for Croatian independence and were killed as traitors of Vienna (they were fighting against their absolute power of the Habsburg family). 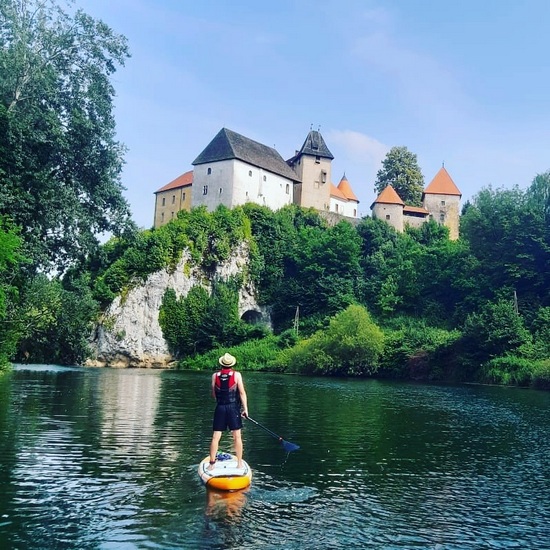 Ozalj castle is located on Kupa river, near Karlovac city

The families that ruled the castle were also artists and writers so it’s a known fact that books and translations were written in the fortress. Now it’s a living memory of the noble families with a line:

„Eternity awaits the ones that die a fair death“.

SUP tour Croatia takes you to explore the city from a different angle.

Old books say that the castle was always there, on a hill above the river. They also say that it was finished in the 13th century. It was built as a defense for the traitors of salt and wheat on the Kupa river. It was named after the oak (dub) that surrounds it.

It can be added to the Plitvice Lakes Tour from Zagreb.

This baroque castle was built in the 18th century. It had no defense function, it was only for living purposes. But it was built on a place of an older medieval fortress. 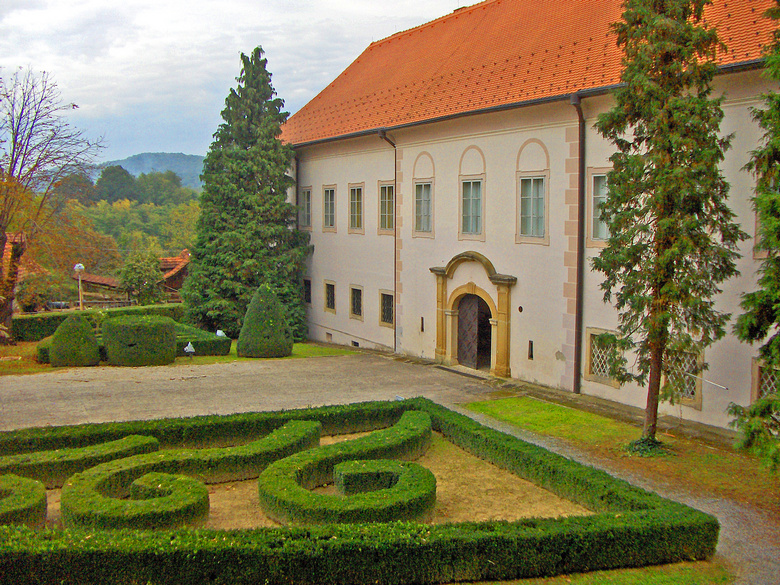 The reason why I mention it here is because it is connected with a part of Croatian history, a fight of the peasants again the will of the nobleman.

Below the castle, on the slopes of the hill, overlooking the Stubica valley, you can also visit a statue of Matija Gubec, the leader of the peasant rebellion and the museum of the fight inside the castle.

The castle is close to the city and perfect for a day trip to Zagorje region.

About the Author: Tanja Gulija

This site uses Akismet to reduce spam. Learn how your comment data is processed.