TITO TOUR – TOUR OF THE BALKANS

Places on this tour are connected to Joseph Broz Tito and his heritage.

Tito Tour – Tour of the Balkans

Josip Broz Tito was a Yugoslav president and he was well known and famous even outside of the Yugoslavian borders. He was a leader of the partisan movement and one of the founders of the Nonaligned movement. Tito enjoyed luxury and he knew how to recognize the most beautiful spots in his country. In these destinations he lived, spent his free time and entertained guests from all over the world. We will take you on a tour to see some of the spots and learn all about the history of the region.

We will start the tour by picking you up from the airport. A private car will take you to your accommodation in the city center. After a short break, we will take you on a city tour of Zagreb, but again connected to the main character of this tour – Tito. We will visit some locations he lived at any revise his legacy in the Croatian capital.

On the second day we are taking you on a day tour to Kumrovec village. You will visit Zagorje region and the small village Kumrovec because Tito was born there and was in many ways connected to it. You will visit his house of birth, the villa Tito built later on in the village and also the Political school. You can have a cup of coffee in his favorite village pub and try a bit of wine from Tito’s vineyard.

Another day tour but we are taking you to Slovenia, former Yugoslav republic. Again, we are following Tito’s footsteps and you will be visiting locations that are historically connected with Joseph Broz. First Stop is Bled lake and a visit to the stunning Bled villa on the banks of the Lake, looking towards the island and castle. Next stop is Brdo castle in Kranj. It was Tito’s residence for a while. Last stop will be Ljubljana, the Slovenian capital. A walking tour through Ljubljana while acquainting with the countries history.

Day tour takes you to the Istrian peninsula, as many would say the most antifascist part of Croatia. You will visit the Brijuni islands, the national park, a former Tito’s residence for approximately 4 to 6 months in a period of 30 years. As a nature lover, he was all about nature and wildlife protection and that’s probably the reason why Brijuni was preserved in this way. Tito welcomed a large number of celebrities like Valentina Tereshkova, Che Guevara, Alberto Moravia, Mario del Monaco, Sofia Loren, Carlo Ponti, Gina Lollobrigida, Elizabeth Taylor, Richard Burton.. Besides celebrities, due to his political duties he welcomed many presidents and monarchs: Haile Selassie, Gamal Abdel Naser, Nehru, Fidel Castro, Ho Shi Min, Nikita Hruščov, Leonid Brežnjev…

You will spend the day at Plitvice Lakes national park. Besides sightseeing the oldest and the biggest Croatian national park we will take you, if possible to the Tito’s villa – Villa Izvor – at the Lakes. The villa was built by the political prisoners. The villa was built from the rocks from Medvednica mountain and the prisoners from Lepoglava did the woodwork. In the time it was built, it was the most expensive villa from a president.

Today you will be all about Yugoslavian military heritage in Bosnia & Herzegovina. You will visit his military base in Drvar and the museum May 25th. The most valuable item they have in the Museum is Tit’s Marshal uniform. The uniform was actually a gift made by military tailor in the base but Tito never received his gift. The uniform ended up in Vienna as a part of an antifascist exhibition but when the museum in Drvar was open it was returned to the rightful owners. Part of the museum is also an ethnographical exhibition with items used in this area in the past.

You will end the day at your accommodation in Mostar.

The day will start with a walking tour of Mostar and the sightseeing of the Partisan cemetery in Mostar which was visited by Tito himself. The author of the monument on the cemetery was Bogdan Bogdanović to remember the fallen partisans from Mostar. The cemetery has 661 tombstone and they have symbolic significance, and the whole monument does, also.

You will continue the tour towards Dubrovnik. You will do this drive on a scenic road next to the Adriatic sea. You will pass the city of Ston known for the longest city walls in Europe and famous for it’s oysters that you can taste them straight from the sea.

A day dedicated for the city you shouldn’t miss on this route. In a walking tour you will find out about the history with Tito, but also his connection to the City itself. Many claim that it was actually Tito who stopped Dubrovnik becoming a part of Serbia in 1944. Tito had many official meetings in Dubrovnik and also visited the Dubrovnik Summer Festival. You can also visit the Red history museum with the exhibition on socialism and everyday life at that time.

This day is dedicated to Montenegro. You will drive through Montenegro and have a chance to enjoy the stunning cities and sea fronts. On the way to Podgorica (formerly known as Titograd or Tito’s city), you will see the sights of the cities: Kotor, Perast and Budva while driving along the Montenegrino coast.

You will end the day in Podgorica or formerly known as Titograd. When Tito gave the statehood to Montenegro, Podgorica became it’s capital. In 2018 the citizens of Podgorica revealed a new monument to Tito. They are, as they say, proud of the antifascist heritage in their country and for them Tito had a significant role.

Today you will be travelling from Podgorica towards Sarajevo, the capital of Bosnia and Herzegovina. You will pass on a scenic route, and one of the stops will be in Nikšić. You see see the sights such as the Home of the revolution and the Communist Partisan Monument. This monument at Nikšić commemorates the fallen soldiers from this city who fought against Axis occupiers during the National Liberation War (WWII). In addition, this monument is a memorial to the 32 Partisan soldiers and anti-fascist fighters who were executed on Trebjesa Hill where this monument is located.
Overnight Sarajevo.

When you return to Sarajevo you will have a walking tour of the city. Sarajevo is often referred to as the Jerusalem of Europe due to the religious and ethnic differences inside the city. Not only in religious sense, Sarajevo is architecturally very different and has many styles – from the Baščaršija street from the ottoman empire to modern present architecture.

If you like you can visit the Tito café, a café in the city center dedicated to the Yugoslav President.

On the way to Begrade we are again taking you on a scenic drive with a few stops along the way. First stop is Višegrad. The city has a long history dating back 1500 years B.C. The city itself was under the Ottoman empire until in the 19th century when the whole country is ruled by the Austro-Hungarian empire. The World wars severely damaged the city including the famous Drina bridge.

Užice is the next stop. Formerly known as Tito’s Užice (you probably didn’t know that in every Yugoslav country at least one city was dedicated to Tito) was the partisan headquarters in fall 1941. The museum in the city is dedicated to that role of the city.

The tour ends in Belgrade, the capital of Serbia. You will get to know the Serbian capital and how it was connected to Tito. Even though Tito died in a hospital in Ljubljana, his remains were taken to his villa in Dedinje, called the House of Flowers including the Museum of Yugoslavia and the Mausoleum of the President. At Tito’s funeral in 1980 there were over 200 highly leveled officials from 127 countries of the world. From that time till now the house visited over 17 million people from all over the world.

We are free to offer you a transfer to any airport in the region.

Tito Tour – Tour of the Balkans 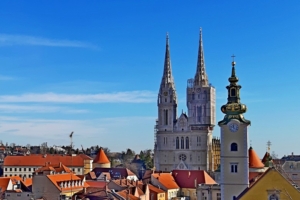 Best of Croatia Tour includes all the most beautiful attractions from Zagreb to Dubrovnik.